It is in the entrance of Ahlat on Tatvan direction, on the right of the road (across the Open Space Graveyard), in a close place to lake Van, in the location known as “Eyiler” amongst people. The epitaph of the kumbet is not available.However on its northeast, between remains of sadi Aka (Aga) kumbet its epitaph was found and the date 1300 (the end of 13th century) was read.However the epitaph isn’t permanent today.Considering construction techniques and decorative features it is accepted that it was built about the year 1285.Cobanlı Seyh Hasan built a masjid with Usta Sagird name in Tebriz when he became khan in 1340 on ılkhanate time.Since Ahlat was in Küçük Şeyh Hasan’s administration, him making to built Usta Şagird Kumbet is within the possibilities. 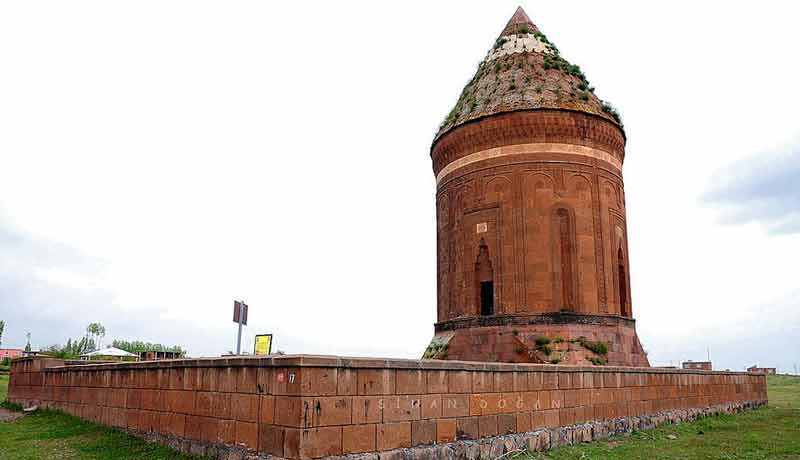 Kumbet has square base, cylindrical body, conical hat and two storey.Ulu kümbetis the largestof the kumbets in Ahlat.It was named as “Ulu Kumbet” by.A.Gabriel.The stairs on the eastern front of the kumbet which has two storeys goes down to the funeral floor.Over this place is covered with cavetto vault.Downstairs is more large and higher compared to many kumbets.Door of the funeral floor is opened to side front not on the front door as a necessity and interior or exterior space deterioration is prevented.In kumbets with high pedestals this problem was always solved in this way.The cylindrical body is located on dodecagon corner chamfers formed from a square plan and followed by bracelets.The surface of the body is covered with the dome inside, conical hat outside. To upstairs, can go up with reciprocal (two sided) stairs on North.On the second floor, there is a window on east, west and South.The small upper window is located in the southeast corner.From the natural surface of present –day, up to the vertex of cone is 20 meters high.The sum of these if floor of funeral is included height is 22.35 m.The length from bottom floor to the vertex of roof is 36.5 meters